In this article, you will get all information regarding St. Petersburg Tenants Union stages overnight protest demanding rent control 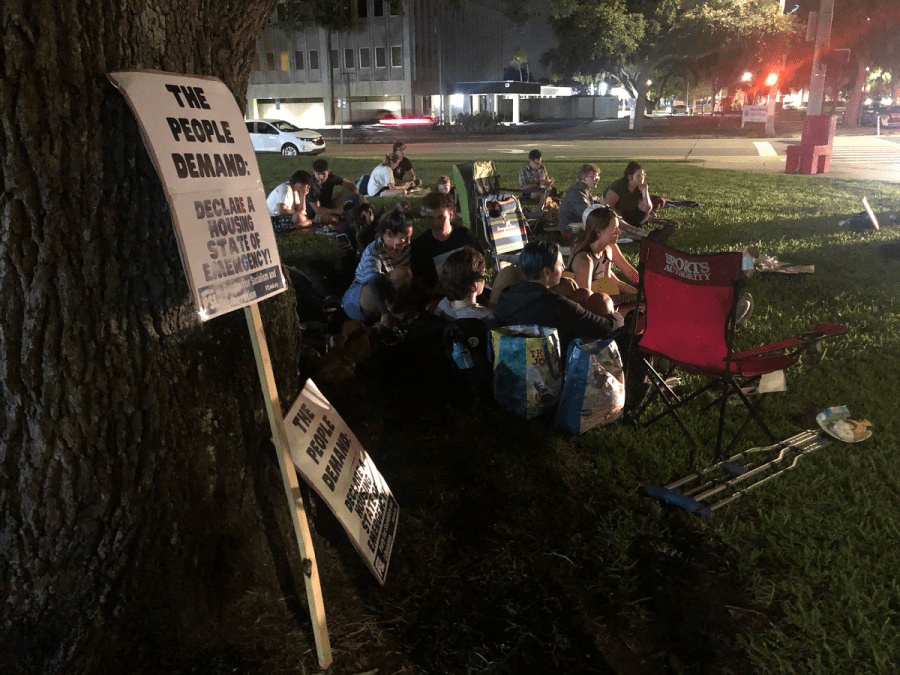 “We all have to live and we deserve to have decent housing,” said 80-year-old Bette Steinmuller, who lives on a fixed income, like many seniors in St. Pete.

Steinmuller said she is worried about being able to afford her apartment if her rent continues to rise.

Steinmuller stopped by Wednesday evening to show support for the St. Pete Tenants Union that organized the overnight sleep-out demonstration.

“We need this rent control and we need it now,” organizer Jack Wallace said.

The St. Pete Tenants Union is urging city council to declare a housing state of emergency in order to put a rent control referendum on the ballot in November.

“I don’t care how much you make, if you get a $400, an $800 dollar increase, no one is really set up for that kind of increase in their monthly expenses,” said Nick Carey, an organizer from Faith in Florida.

On the other side of the bay, Tampa City Council member Orlando Gudes is asking city attorneys to draft a resolution for voters to consider a five percent rent cap.

“Seeing folks in Tampa and also in Orange County have success and move this forward has really kind of reignited for this and it help our case with St. Pete,” Carey said.

While they want voters to have a say on rent control in November, they are also urging city council to not put a referendum on the ballot that would provide property tax exemptions to St. Pete businesses over a 10-year period.

“We already have pretty low taxes,” Wallace said. “I think the corporations should learn to pay their fare share.”

As 8 On Your Side reported this week, federal rental assistance isn’t keep up with rent increases in Pinellas County. According to the county’s housing authority, seven percent of voucher holders cannot find a place to live.

“Frankly, I don’t think there should be any rental increases in the next year,” Wallace said. “We’ve seen rent increases over 30% in St. Pete over the last two years and I think that’s enough. I don’t think these corporations and landlords need a penny more.”

For Steinmuller, the clock is ticking toward her lease ending at the end of September.

“I can’t say I’m gonna be on the street because when my kids find out they’re probably gonna wanna help me. But they have their own issues,” she said.

Mayor Ken Welch’s office has said it has worked to create more affordable housing options in the city.

The demonstrators plan to be outside city hall until the meeting begins at 9 a.m. Thursday.

See also  'It Can’t Be Any Worse Than The Dystopian Wasteland We See Every Shift?' | The Thin Green Line
ControldemandingovernightPetersburgprotestrentstagestenantsUnion