In this article, you will get all information regarding Richards celebrates Prem return by mocking Man Utd icon Gary Neville’s CLOTHES

Richards pounced on Nev’s Stone Island cargo trousers and Jordan trainers as they walked in at Crystal Palace for the clash with Arsenal.

The 34-year-old burst into hysterical laughter and accused Neville, 47, of “thinking he’s 18!”

But far from feeling sole-destroyed, former England right-back Nev responded by giving his TV pal the finger – and a bashful smile.

Richards launched his fashion parade tirade when he saw Nev leaning against a wall at Selhurst Park. 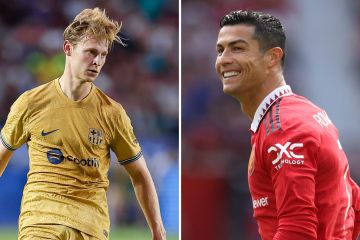 Immediately homing in on Neville’s ‘trendy’ footwear, he screamed: “What are those?!”

And looking upwards, he let out an equally-merciless cry of: “He’s got the Stone on as well!”

Nev tried to divert attention by giving an up-close glimpse of his new haircut and saying he was worried it might be too short.

That, of course, only provided more ammunition for Richards and their TV team-mate Jamie Carragher.

Perhaps they should take their barber banter into the Fringe Theatre.