In this article, you will get all information regarding Curated Art Week exhibits fill Miami Beach hotels – Inspiration 2 Day 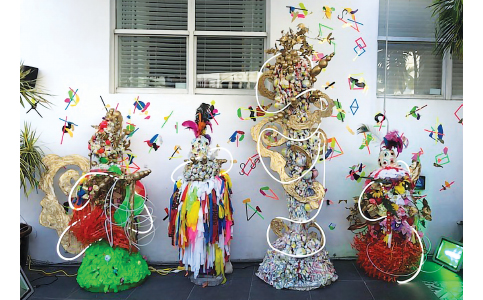 Miami Beach takes center stage for a second year after the post-pandemic return of Miami Art Week and Art Basel-related events with curated art exhibitions and activations in hotels of the city.

Starting with No Vacancy’s third edition, a city of Miami Beach juried competition in partnership with the Miami Beach Visitor and Convention Authority, 12 diverse visual artists are to present their art in Miami Beach hotels to Dec. 8, for $35,000 in prizes to two selected winners. Each selected artist has received a stipend of $10,000 to realize their project in each hotel. Winners are announced on the last day of the exhibition.

This year’s artists include:

■Antonia Wright and Ruben Millares showcasing “Patria y Vida” at the Faena Hotel, a sculpture of lighted barricades as a symbol of global political resistance, according to Miami Beach Arts and Culture.

■Brookhart Jonquil is showcasing “Liguus” at the Cadillac Hotel & Beach Club, the sculpture of “a dying snail or a reformed orchid,” according to the artist, where he hopes to capture endangerment and adaptability.

■Charo Oquet is showcasing “Maxi-Building on the Baroque” at the Catalina Hotel & Beach Club, an eclectic spectacle in fashion, according to Miami Beach Arts and Culture, “reflecting the chaos and instability that encircles contemporary life through color and shape.” The sculptures simulate Afro-Indigenous dresses and adornments.

■Claudio Marcotulli is showing “Sea Show” at Hotel Croydon, a light sculpture installed on the wall that mixes its patterns and images with a concealed TV monitor in its center.

■Jessy Nite is showcasing “In Your Eyes, I come Alive” at the façade of Avalon Hotel Miami, her work harnesses the sun to create the shadow of the phrase on top of the façade of the hotel. “Using its position in real-time, the sun becomes the narrator,” said the artist.

■Justin H. Long is showcasing “Angle of Vanishing Stability” at the International Inn On the Bay, a fully upturned sailboat, suspended 10 feet in the air by its mass.

■Maritza Caneca is showcasing “Submersion in Blue” at Riviera Suites South Beach, the picture of the moment the camara is submerged into the pool, serving “as a vessel to tell the history of a place and the people who inhabited it,” according to Miami Beach Arts and Culture.

■Magnus Sodamin is showcasing “Reflections of Florida Wild” at the Loews Miami Beach Hotel, an outdoor vinyl mural on a custom fabricated frame, inspired by the Everglades.

■Sri Prabha is showcasing “Cosmic Occupancy” at the Betsy Hotel, video projections on and around The Orb of galactic and contemplative space.

Additionally, The Gabriel South Beach, in partnership with Black Fence, is hosting its inaugural Miami Art Week exhibition “Art as a Social Experiment,” which is to feature talented diverse artists, on Dec. 3 from 4-7 p.m. According to a press release, artists Kelsey Marie and Shauna Harley will present a live painting experience, “that will become a reflective photo moment for guests to immerse themselves.”

The Ritz-Carlton in South Beach is presenting the MONAD Studio by artists Eric Goldemberg and Veronica Zalcherg with “sonic sculptures” displayed at the lobby.

“These sonic sculptures will be bright, grandiose, playable instruments that will be used during a private concert in partnership with the Miami Symphony Orchestra on the evening of Tuesday, Nov. 29,” according to a press release. “The instruments will include astounding renditions of a piano, a lap guitar and xenophone, a twin serpent, a zhu, a bichord, a slide guitar, and a segmented bass guitar.”

The Ritz-Carlton is also presenting “An Exhibit for Peace,” directed by Ronit Newman in partnership with Manolis Projects Gallery. The exhibition is to feature over 30 commissioned paintings by contemporary artists Ron Burkhardt, Carol Calicchio, Samuel Gomez, Jill Krutick, Aurelia Majorel, Timi Ogundipe, Annemarie Ryan, and Camilla Webster, to be displayed at the hotel’s restaurant Fuego y Mar and some of the common areas. Proceeds from the art sold in this collection, a press release said, will go to José Andrés’s World Central Kitchen’s support efforts in Ukraine, which delivers meals to families torn apart by the war.

The Standard Spa and Hotel in Miami Beach is to showcase Colombian artist Nicoläs Villamizar’s live mural on Dec. 1 on the hotel’s patio, “inspired from organic shapes, intimacy, and the human body, with a mix of color and elusive framing to form an interesting diary of life,” according to a press release.

The Kimpton Angler’s Hotel is presenting its Art UnRestricted exhibition by MUSE Art Fair, from Nov. 30 to Dec. 4. “With the absence of geographical boundaries, MUSE aims to cultivate conversation, connection and a feeling of community within the global art world,” said a press release. “It features an eclectic mix of paintings, photographs and sculptures from Black, Hispanic, Caribbean, African and women artists residing throughout the US and abroad.”

Artist Becky Robbins will also be showcasing seven pieces from her collection “Yūgen” at the Balfour Hotel’s public spaces during Miami Art Week.